Of all training principles and philosophies developed over time by strength and conditioning coaches, few seem to agree upon the optimal load for repetition max testing. Some will argue that higher repetition max tests are safer and more effective, while other coaches contend that the simplicity of a single rep max test should prevail. Before I add to the pros and cons of each repetition range, a quick FYI for beginners is required. Beginners, you do not need to test your max! Neural adaptations and improved technique alone will increase the weight used on almost every movement trained within the first number of weeks and months.

Obtaining a figure for basic compound lifts (bench, squat, deadlift, overhead press) as well as the Olympic lifts and their variants (clean & jerk, snatch, high pull etc) is important for the sound development of a strength and conditioning program. When a 1 rep max number is obtained or calculated, it allows a strength coach to correctly prescribe training intensities for future exercises. By using percentage based training, a coach has the ability to prescribe and therefore know, how hard every athlete is working.

As exercise repetitions can range from a single rep to even 20+ reps in some cases, it is imperative that athletes work within the correct training range, which is typically based upon time of year, stage of season, age, and a number of other various factors.

Strength: up to 6 repetitions

*For power adaptations, many coaches argue about the optimal training load. With much dispute, the load for power training may be as small as 40% of 1-RM to as high as 80-90% of 1-RM.

Maximal Strength is the greatest amount of force that a muscle or muscle groups can voluntarily produce, regardless of time.

Yet, as evidenced by the repetition max continuum above, validity and reliability of repetition max testing as a predictor of 1-RM is inaccurate. It is inaccurate as an athlete may lift 8+ repetitions of a certain exercise- therefore they are assumed to be working within hypertrophy development, yet these numbers are used as a calculation for maximal strength. As maximal strength and hypertrophy are two different adaptations that occur due to weight training, it almost seems like we are comparing apples to oranges.

I recently spoke about this issue at length with Chris Steck who is the athletic performance coach of UNC-Pembroke’s baseball team. Together we reviewed data on the entire team from last spring’s repetition max testing. None of the players’ performed 1-rep max tests, but instead performed a single open-ended set to failure. This is the premise repetition max testing.

Total reps ranged from 4-22 and were then used to calculate a possible 1-RM that future training would be based upon. We found that eight player’s could theoretically squat 400 lbs+ for at least a single rep. Yet, none of these players came close to regularly moving that amount of weight in their weekly training. If Chris was to change the training goal to the development of maximal strength, he is left with a dilemma;

On the face of it, this question appears that it can be easily answered. Answer B makes sense, but common sense tells us that an athlete could get crushed by such a weight. Yet, scenario B takes time-and time is always limited in the weight room.

For example, a baseball player recently squatted 375 lbs for eight reps (close to a max) yet their calculated 1-RM from earlier in the year was 500+ lbs. From viewing the training load chart, it’s obvious that these numbers do not add up. 375 for eight reps = 470 max. 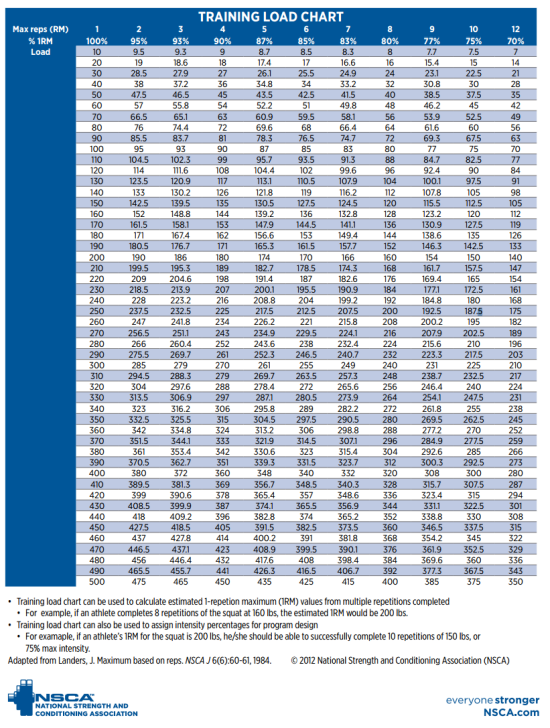 The ability to exert maximal force for a single repetition can vary widely. If an athlete is having a poor day (lack of food, lack of sleep, exam week etc) it is likely that they will not reach their full potential. Therefore, it makes sense to test athletes on a good day when they are fully rested. However, this process is easier said than done when it requires having 10-50 athletes all having a good day simultaneously.

Another problem with single rep testing is the inherent risk involved. Often times technique will suffer when an athlete nears their maximum weights. The risk involved within the Olympic lifts are even greater- athletes must be taught how to safely ”fail” with the barbell. Again, this takes time- something that is of utmost importance within an already busy schedule for athletes.

It is difficult to argue against the validity and reliability of a single rep for obtaining a number within traditional compound lifts. I’ve heard of some coaches that implement a 2-rep max, under the assumption that only the first rep will be completed with proper technique. The second rep is then disregarded by the strength coach, unbeknownst to the athlete. I also know of some coaches that use 6 and 10 repetition protocols as they believe it is safer. Yet, for anybody that has completed such a protocol, isn’t the 10th rep always a grinder?

And lastly, some coaches would argue that using 10 reps results in a x10 increase in likelihood of injury when compared to a single rep max. But one thing is for certain, 1-RM testing is a lot of fun.

Coaches, I’d love to hear from you. What protocol do you use with your athletes? And why?